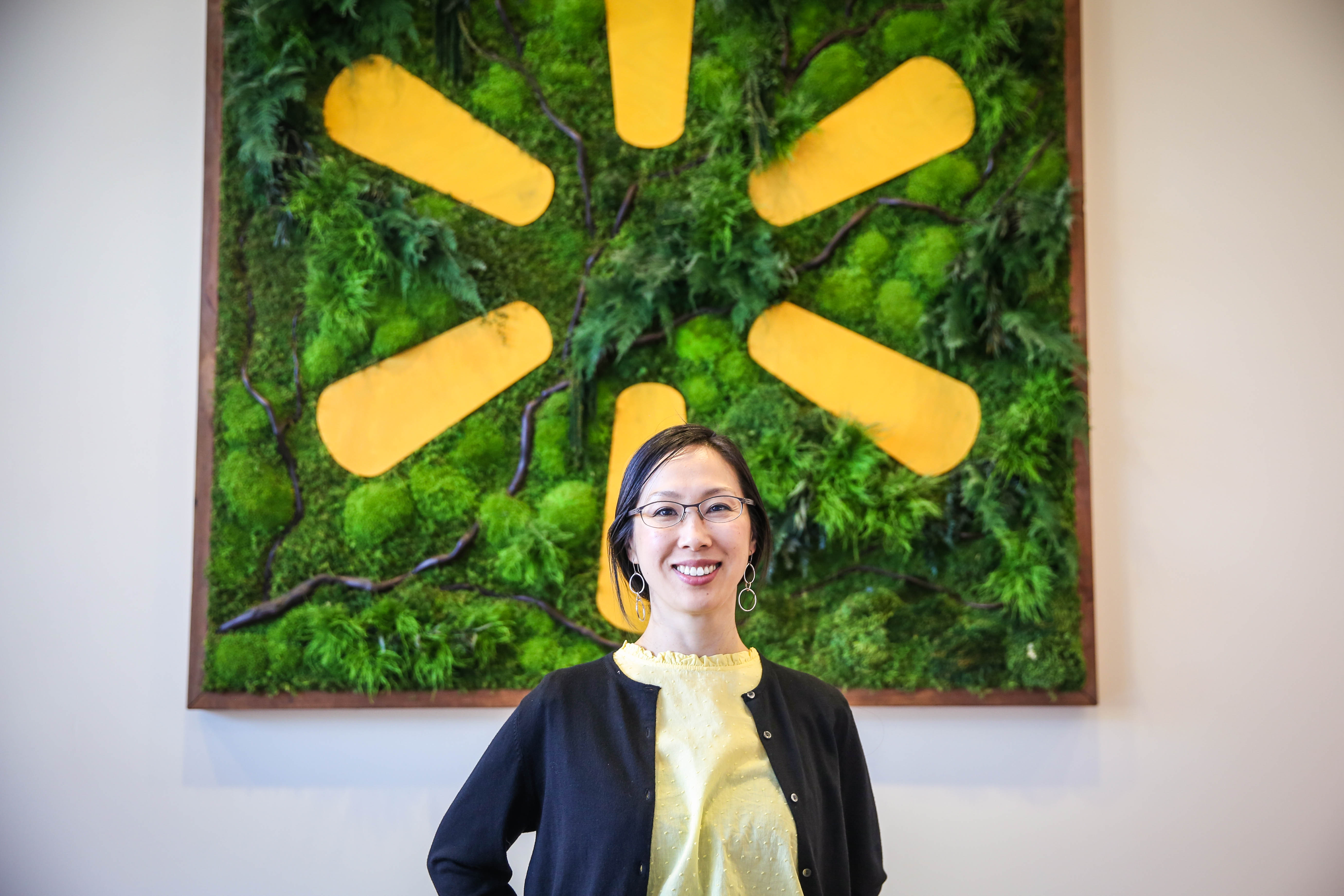 Deborah Chin worked in digital and print design for over a decade before taking a break to care for her daughter. What she hoped would be a break of only a year quickly turned into two as she juggled full-time care with efforts to transition into a UX Design career. After being accepted into a UX Design returnship at Walmart Labs, she was hired full-time as a Product Designer, where she now works on integrating the digital and physical store experience. She talks about preparing for her career change, the ways Path Forward and Walmart Labs supported her reentry into the workforce, and acting as a positive example for her daughter.

Tell me a bit about your career break. What type of work did you do before taking a break? What prompted your break, and how long were you out of the workforce?
I was out for about two and a half years, counting my maternity leave – from March 2016 to September 2018. Before my break, I was doing digital design, and prior to that, I did print design work, with some freelancing thrown in the mix. In total, I had been working professionally somewhere between 10 to 15 years. When I was pregnant, I knew I wanted to take a year off for my daughter. I had always had this idea in my mind that I would want to take time off to take care of my child, because those early months are so important and I didn’t want to miss them. I thought it would be easy: I’d spend a year with my daughter, and then I’d go back to work.

A year went by, and then it turned out it wasn’t so easy to go back to work for several reasons –  first, I was in the midst of making the switch from visual design to UX design, so I had taken classes and done a bit of freelancing. Once I decided to return to work as a UX designer, I had to review everything I had learned, and most importantly, start networking and build a portfolio. It was really difficult for me to even think about doing those things because I was taking care of my daughter full-time. Then, there was also daycare to consider. My family had been on one income for a while, and the question became, “How do I go back to work without breaking the bank paying for daycare, which is really expensive?”

How long were you actively looking for work prior to applying for a returnship?
About a year. I think I got lucky because it wasn’t that long.  I had learned about Path Forward from a friend who was also a mom returning to work. I signed up for the newsletter thinking it would be helpful, but I was doubtful because most of the positions in the Bay Area were very technical, and I figured I wouldn’t be able to find a role that fit me, though I ultimately did.

Did you take any classes or complete any training in preparation for your return to work?
I had already taken classes prior to my break, though I did work as a teaching assistant at UC Berkeley Extension School’s UX Design program for three semesters. It was a stepping-stone that helped me get into the mix without finding full-time daycare for my daughter, because a lot of the work was done at home and in the evening. I was mostly focused on building my portfolio and networking. I would reach out to people I had taken classes with, and connect with fellow converts from visual to UX design.

What was your returnship role at Walmart?
I was brought on as a UX Designer at Walmart Labs and joined the “stores” or “digital acceleration” group. Our products bridge the gap between the digital and physical store environment – a representation of the physical store on the website. I work on the store pages, the Walmart store finder, and the weekly ad. Other products in our group include the Walmart app experience and how it changes when you walk into a store. I decided during my break that I wanted to focus on retail, which is another part of this job that was so perfect for me. That’s what my background was in, both on the corporate side and in-store. I’ve spent time working in stores, so I hold a lot of appreciation for both customers and store associates. I included in my cover letter that I had a passion for retail, and would love to work on products that combine the brick-and-mortar and digital experiences, and that is exactly where I landed, which is pretty amazing.

What role are you in now and does it differ from your returnship?
During my returnship I was a UX Designer, and the title changed to Product Designer at conversion. I lucked out because I’ve continued working on pretty much the same projects, so it’s been a seamless transition. One of the main projects that I worked on during my returnship is currently in development now, which is pretty neat.

Are there any skills from your pre-break career that you use in your new role?
All of them! The UX Designers here do a lot of visual work as well, so all the visual design work experience I had from my prior career converted into useful skills here. I think being a freelancer helped, too, because I am used to designing products from start to finish. Even my prior work as a copywriter/proofreader has come in handy.

What did you find most helpful about being part of a Path Forward program at Walmart?
Because I was so used to freelancing and the contract lifestyle, being able to see the 16 week returnship as a contract position really helped me. It lessened the stress and made it easier for me to accept that it’s possible that this could end, and I just needed to just get as much out of it as I could. On the flip side, because I was so used to the freelance life, I expected to be placed into a position and to hit the ground running, and to be basically abandoned to fend for myself. I initially thought that Path Forward would act like a placement agency. I was surprised to have all the onboarding, all the touch-points throughout the process, where they made it very clear to us that we were not just free-floating. We were tied to Path Forward and they were there for us for anything that we needed. I found that to be refreshing. I felt like Path Forward was really there for us, and it was a nice feeling.

What was the experience of returning to work at Walmart like?
Walmart had their own curriculum in addition to the Path Forward workshops. We had trainings, guest speakers, and we got several chances to come together as a group several times. We were even given special opportunities to meet with senior leadership. Additionally, I am super grateful that I was hired by an amazing manager and get to work with a great group of people.

I think there are many caregivers who have a fear about going back, and Path Forward’s returnship program is not just an invitation back, but it’s as though they and the companies they work with are saying, we see you, we value you, and we welcome you. I feel like Walmart taking it a step further with its own curriculum was like them saying – we’ll do all that and help you too.

What has been the most exciting or gratifying part of returning to work?
I think I’m in a unique situation where I got to do something different than what I was doing before, and it’s exactly what I had been wanting to do. That in itself is extremely gratifying. As a message to others, I think it’s a good story for people who are looking to make a slight career change, because it shows that it can happen.

The other gratifying thing is that I have a daughter, and I believe that it’s so important for us as parents to lead by example and to try and be as happy as we can in our own lives. And that was something I had a revelation about during my break, where I felt like pursuing a career was part of showing my daughter the importance of striving for what makes you happy, and not giving up. There were definitely moments where I’d start thinking, “this is too hard, I should just go back to what I was doing before”. And part of the satisfaction of being where I am now is that I feel like I’ve striven for happiness not just for myself, but for the sake of setting an example for my daughter.

Thanks for sharing your story, Deborah! We are so happy you’ve found success and balance in your career. You can learn more about Deborah on her LinkedIn page. – The Path Forward Team